Join in receiving Seilskuta TX-51 together with the mayor, Shantykoret and others when she arrives in Farsund 13.7 at about 17

Sailing ship TX-51 and her crew

The Dutch two-masted schooner sails under the Dutch flag and has its permanent berth in Scheveningen. The North Sea is the main sailing area for TX-51 with Norway as the most favorite destination. This year, the destination in Norway will be Farsund. It will be a great adventure and a beautiful experience when the coastline of Norway rises.

On 1 December 1939, the sailing ship TX-51 was launched as a motor trawler at the 'de Dageraad' shipyard in Woubrugge, the Netherlands. At the end of 1940, during World War II, the ship started as a fishing vessel from Scheveningen. After this, the TX-51 also functioned as a patrol vessel for monitoring fishing vessels. All this under orders from the German occupiers. On June 20, 1941, the ship was requisitioned by the occupying forces, rebuilt and classified as Ore31 at the Ostsee Küstenschutz Reval under German crew in the service of the Kriegsmarine and kept in service as the Vorposten Sicherungsboot VS1413. In September 1945, she was released again and sailed back to the Netherlands under her own power to return to service as a fishing vessel.

In October 1975, the ship was resold and used under the name "Maarten" for arms and drug smuggling to and from Lebanon and Morocco. These activities took place from Scheveningen off the coast of Dunkirk, French and Spanish territorial waters and during the civil war in Lebanon. The weapons were delivered to Byblos. The substances were delivered in the Netherlands at Scheveningen. Playing cat and mouse between the smugglers and the customs authorities in Scheveningen, Gibraltar, Algiers, Byblos and Beirut is described in detail in the book 'Black ships, says the captain' by Anton Olijhoek. Eventually the smugglers were arrested and the ship was taken out of service for a long time after which she was moved to Amsterdam. In 1980, the name of the ship was changed and received a registration certificate under the name 'Jason'. The ship was then used as an offshore vessel for divers working at the oil rigs at sea.

The last episode is about the return to Scheveningen. The TX-51 was restored during ship inspection and certification from 1995 to 2005 and converted into the current 'Ocean Going two-masted schooner'. In 2016, the ship was bought by Michel van 't Zand and has since been in the other port of Scheveningen for sailing charters. Since 2017, the ship has also received an official registration certificate in her original name TX-51 from the Kingdom of the Netherlands. Although the ship has the registration number Texel (TX), it has sailed for the longest time in a row from the port of Scheveningen throughout its existence. Knowing about her eventful past, it is very special to realize that Scheveningen is now the permanent home port of this beautiful sailing ship TX-51.

On July 3, we threw off all the lines and we set sail with a great adventure ahead of us.

If you would like to visit the TX-51, Captain Michel welcomes you on board! 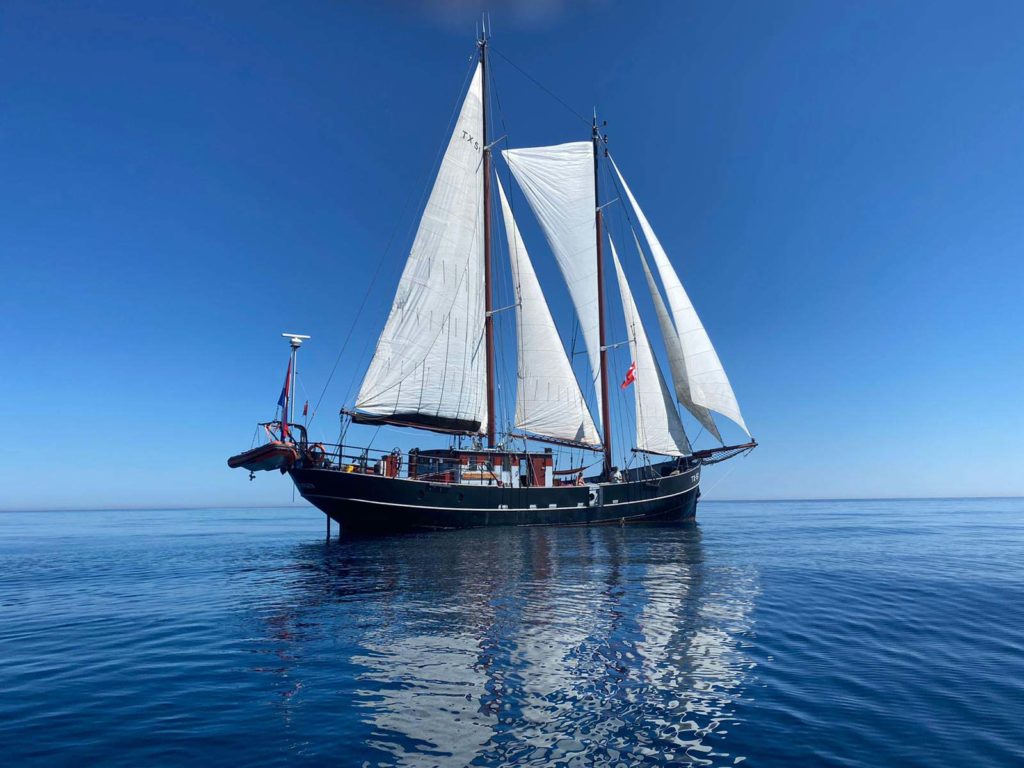